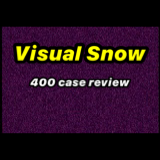 It’s been a long time since I’ve prepared something about Visual Snow.

The concept of visual snow has already been over 20 years, but much has not been revealed yet. That’s why there is no clear treatment.

For this reason, even if I read various papers, there are not many papers that can review for you

It’s a little vague to say that it’s something new that can directly help patients.

Nevertheless, I think many people want to know more about Visual snow, so I’d like to review the paper a little more often in the future.

If you want to see the content on video, you can watch it through my YouTube channel below.

Now, this is the paper I prepared today..

It’s not a very public journal, but it’s worth watching~ the title is

“A therapeutic response to 400 visual snow patients and the degree of progression of symptomswill be assessed.”

There isn’t much data organized because there is no concept or treatment for Visual Snow syndrome.

So the authors of this paper wanted to collect as many cases as possible and organize them. And study about it.

What types of drugs have positive or negative effects on Visual Snow Syndrome?

There was a change in the degree of symptoms over time.

About whether there have been symptoms change due to the surrounding environment, especially illuminance environments such as indoor and outdoors.

Let’s see about study design? This study was conducted based on an Internet survey.

They promoted the research and gathered participants through a website called Eye on vision.

Only people who meet the Visual Snow diagnostic criteria were participated,

asked them to evaluate the effectiveness of the medication they used.

And they were asked to writing a visual snow symptom diary like this for 30 days.

Let,s see the characteristics of the patients involved in the study,

First of all, there were 400 patients involved in the study.

The average age was 31 years , which was relatively young.

The average age of the onset of symptom patients remember was about 14 years old.

The following is an effectiveness of the drugs used by participants.

The effect is indicated by color.

Green if it is worse after drug use, purple if there was a effect, and blue if it had no effect.

I’ll explain it in detail from behind, but let me point it out briefly,

Antidepressants are the most commonly used drugs (red arrows),

And (blue arrows) these two drugs have a slightly different ratio of green-to-purple, which have effect rather than side effects.

It is a sedative called benzodiazepines and vitamins

Comparative analysis table for all medications used.. It’s so hard to see a table like this at paper.. Shall we just look at important things together?

Did the antidepressant most used in Visual Snow patients really work?

A total of 227 people had experience using antidepressants.

However, it should be noticed that there were more cases where symptoms worsened after taking antidepressants were 58(26%). And worsed cases were more than worked…

If so, is there any reason to use antidepressants in Visual Snow?

Next, it’s not a prescribed drug, but it’s alcohol and drugs that were investigated because it became a deteriorating factors.

Drugs… It’s not uncommon in Korea, but it seems to be used frequently in foreign countries because of accessibility;

Anyway, if you look at alcohol,

Symptoms can be seen worsened in 81% of cases.

If you have visual snow, you must avoid alcohol, right?

Next, it’s vitamins and supplementsthat were unexpected results.

Total 168 peoples has been tried it,

But it was only 8, 5% who have side effect after taking vitamins. So vitamin shows very little side effect than other medicines.

I don’t know if this is… a placebo, but anyway

But it’s not in the paper what kind of vitamin it is, huh?

The following are benzodiazepines family of drugscommonly known as neurostable agents.

A total of 124 patients had experience taking it.

23 people, 19% experienced side effects of getting worse symptoms.

I think we can consider it carefully if it’s a benefit and a risk ratio.

Medication effects depending on age

Here’s a comparison of how responsive the drug is, depending on age, gender, and more.

Among them, the only statistically significant factor was the age at which visual snow symptoms began~

In other words, the later the symptoms began, the more reactions to the drug.

But the caution here is to refer to all reactions, including negative reactions.

The later symptoms started, the better the response to the drug, whether positive or negative.

Symptom changes over the period

Here is an analysis of a 30-day symptom diary.

There was no significant difference between them

We could know that visual snow symptoms were almost constant every day.

Change of symptoms according to the environment

Finally, it’s the changes of symptoms according to the environment. If you look to the left

(green box) outdoors, they did an investigation by dividing it like this.

If you look at it, you can notice that the outdoors have a higher score overall than the interior. The interior talking here is

It refers to interior lighting or white fluorescent lamps from one light source..

Of course, the worst environment is 1 point in the dark outdoors…

This is a summary of the paper

Most of the drugs used in Visual Snow didn’t work.

It would be better not to use it, especially in the case of atypical antidepressants.

Drinking exacerbates symptoms, so it should be avoided.

Vitamins and supplements are worth a try because they have low side effects risk.

Sedatives such as benzodiazepines worked, but additional research is needed because caution is needed for use it.

Fluorescent light or interior lighting were more likely to make symptoms worse than any outdoor environment.

Thank you for reading.

Please use the community for questions. ^^